For centuries the written language of ancient Egypt was lost, their hieroglyphics which consist of shapes, pictures and designs was untranslatable due to no comparison being available to translate. That all changed after the discovery of the Rosetta Stone, a stone tablet dated back to the Ptolemaic era (about 190 B.C). This tablet contained three languages two are Egyptian languages hieroglyphics and demotic the other classical Greek. This stone provided enough information to allow scholars to translate the long dead Egyptian hieroglyphics to understand how the ancient Egyptians lived worshipped their gods, and their history.


After the apocalypse our collective knowledge will be lost, everything from how to build an airplane, to our language could be lost to the descendants of those who survive. One way to help preserve our language and knowledge as well as languages that are nearly extinct is the Rosetta project’s mission. Their goal is to create a library of languages that can survive the apocalypse and be passed down to future generations. To do this they’ve created disks containing 1500 languages, many of which are nearly extinct and over 13,000 pages of language documentation.

The disk is meant to be a physical archive, it requires no computer to turn on or upload, many of the words can be seen with the naked eye the rest can be seen with a magnifier, something that a much less advanced civilization could easily accomplish.

What is written on the disk is a collection of phrases such as the UN declaration of human rights and the beginning chapters of the book of genesis. The disk also contains information on the individual languages themselves, including the location on the planet, information on their writing systems and literacy, and grammatical information which includes a description of the sounds of the language to properly speak it.

This disc could be a key factor for our descendants learning lost technology from being able to translate and read surviving books and instruction manuals, though I doubt it will help them better understand how to program a DVD player. 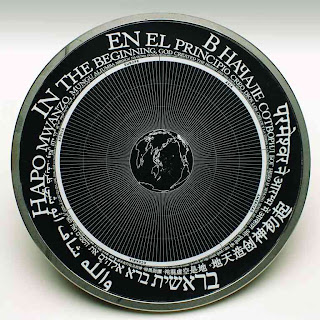 The Rosetta Disk (Top)
Posted by The Wolf

Blogs I Check Out